For understanding Where people are we use “Population Density Maps”, which are provided by the Facebook’s Data for Good initiative. Specifically, we use Population density maps at the tile level (see Granularity).

Description: A Population density map seperates the country into different areas, and for each it counts the number of users that spend most of their time there, for three eight hour time windows each day. For example, for the 08–16 (working hours) time window on May 4, there may be 52.1k active Facebook users that spend most of their time inside a certain area of Copenhagen. Because data is aggregated like this, there is no information left to identify individuals and privacy is thus preserved (see Privacy and data loss below).

Time: The earliest data made for available for a country typically starts shortly before the lockdowns or shortly after. For the UK, Spain, Italy, New Zealand and France data collection starts before their respective lockdown periods begin, and for the remaining countries data collections starts after. For each country, we receive new data with ~1.5 days delay. For each day, three data files are provided; one for each of the time windows 0–8, 8–16, and 16–24 GMT. In Denmark, for example, from March 29 to October 25 (DST), time windows in local time are 02–10, 10–18 and 18–02.

Granularity: Population density maps splits the country into different areas. We gain access to two different levels of granularity. Level (1) describes population counts at the lowest administrative level, which for Denmark is municipalities. Level (2) describes population counts inside geographical tiles up to 1.5 km by 1.5 km in size. The administrative level maps are aggregates of the tile level maps, but they differ in a systematic way due to privacy preservation (see Privacy and data loss below). 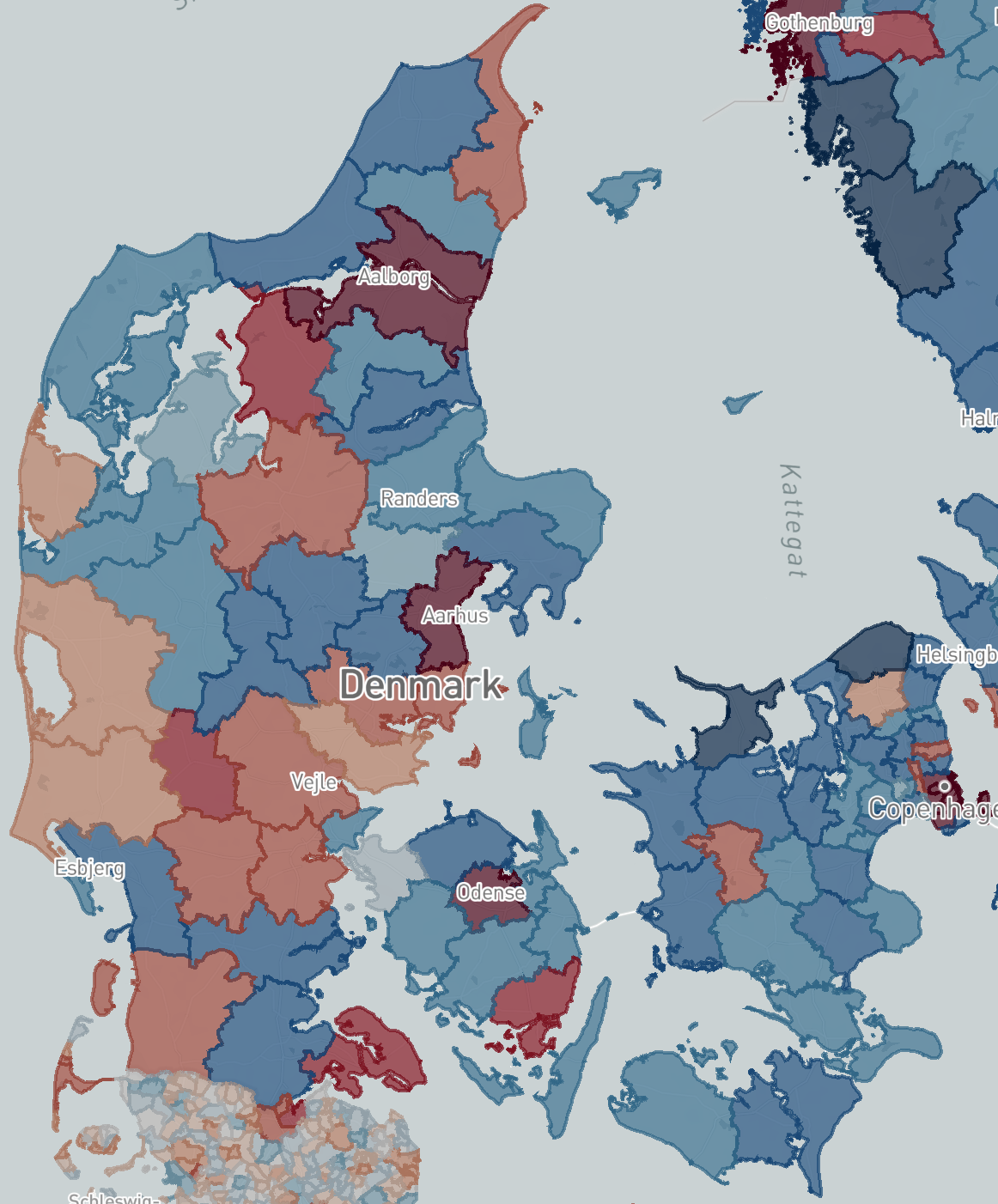 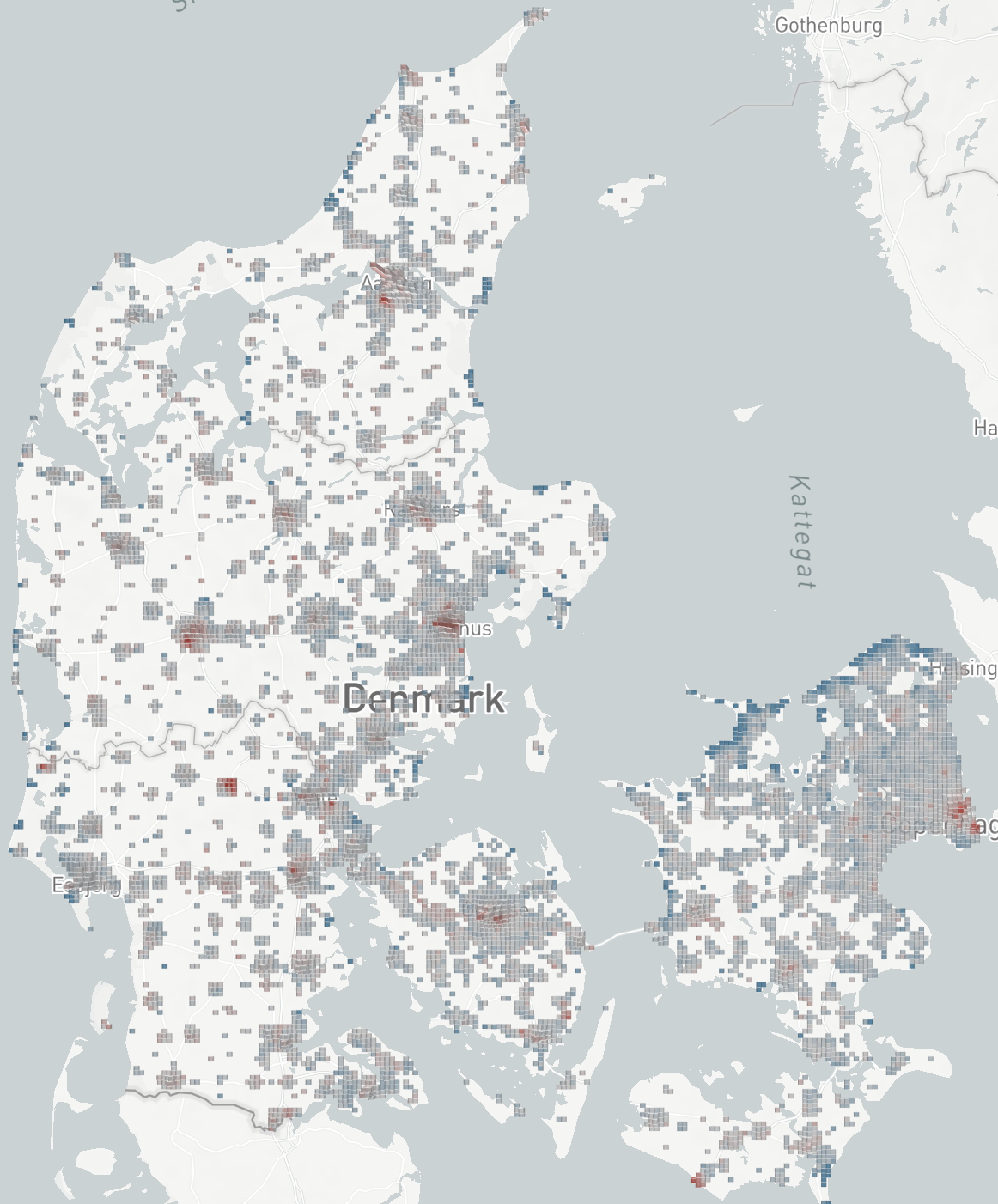 Baseline: For each count (whether it is for a tile or an administrative region) a corresponding baseline count is provided. The baseline is the average count for the same day of the week and time window over the 45 days prior to data generation. It is important to note, that since data generation starts at different times, and for many countries after their lockdown begins, a baseline measure may be polluted by data from the lockdown period. Therefore, by comparing to this baseline reported effects may smaller than those we might have obtained if comparing to baselines that did not include lockdown.

Crisis and baseline counts for an administrative region 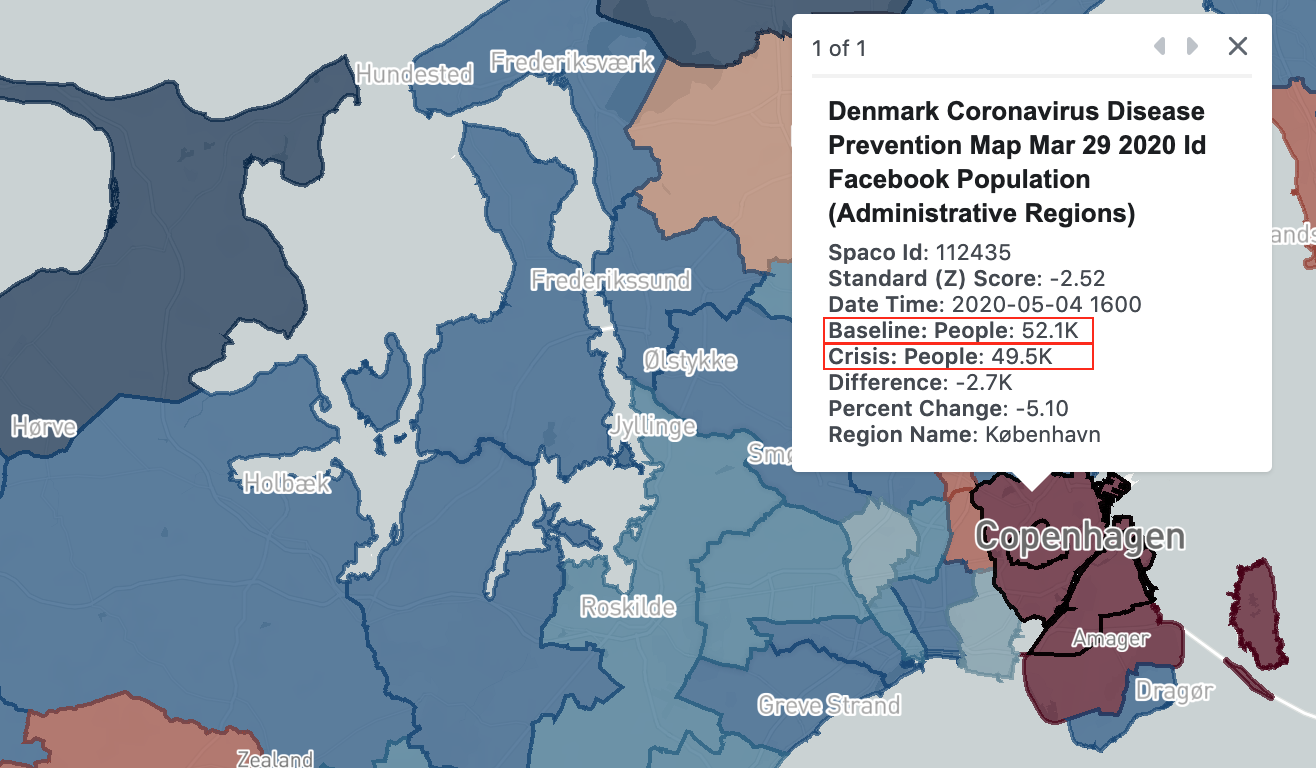 Further preprocessing: In any given time interval, there is some number of counted individuals across all tiles in a country. For example, for Denmark this is between 344k and 540k (mean: 459k; median: 447k; typically lowest between 0–8 GMT). These are Facebook users with location tracking enabled that actively use the Facebook mobile app at some time during a given interval. To offer realistic population counts, we factor into these user counts the ratio between the total number of people in a country (source: Worldometer) and the number of active users in a given time interval. This ratio typically varies between 10.7 and 16.8, dependent on country and time. Although Facebook provides precomputed percentage change values between baseline and crisis, the percentage changes we report are computed after factoring in this ratio, seperately for crisis and baseline. This recalibration assumes that active Facebook users are distributed evenly throughout the population.

Privacy and data loss: Counts are made unavailale in tiles/municipalties at times when there are less than 10 active users. This causes a systematic underreporting of population counts from very low-density rural regions. This is especially a problem in the tile-level maps where it is more likely that an area has few users. Thus, there is a trade-off between granularity and data availablity. The average data loss in tile level maps compared to administrative region level maps is e.g. 82% (±11%) for Denmark, and loss is greater in rural than in urban regions of the country.